Your email address
Your new password
Cancel

   
‘Everyone who is fighting corruption, dirt, social evils is a Chowkidar. ‘Everyone working hard for the progress of India is a Chowkidar’. Today every Indian is saying #meinbhichowkidar, this is what Prime Minister Narendra Modi wrote on Twitter.

Your Chowkidar is standing firm & serving the nation.

But, I am not alone.

Everyone who is fighting corruption, dirt, social evils is a Chowkidar.

Everyone working hard for the progress of India is a Chowkidar.

Today, every Indian is saying-#MainBhiChowkidar

Ahead of the Lok Sabha elections, BJP has launched a very unique campaign called #meinbhichowkidar where he assures the people that he is fighting against the corruption and urges the people to join in his fight against the corrupts. The Prime Minister also shared a 3.45-minute video with the tweet titled "Take The Pledge", urging people to join Modi on March 31 at 6 pm for a video programme titled 'Main Bhi Chowkidar".


As part of this campaign, it has also introduced a tech innovation called conversation cards on Twitter, whereby people will get a personalized message from the PM on Twitter for joining the campaign. PM Modi also changed the name of his Twitter handle to Chowkidar Narendra Modi. Not just him other BJP leaders like Amit Shah and Piyush Goyal, Jagat Prakash Nadda have also added the prefix “Chowkidar” to their Twitter handles. 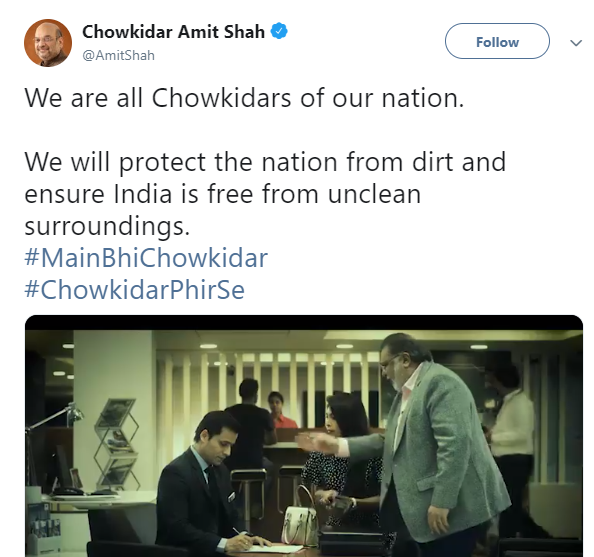 The campaign which was launched against the Rahul Gandhi jibe “Chowkidar chor hai’ seems to become an anthem for people launched successfully by Modi to make a powerful emotional connection with the people. The word “Chowkidar has its origin in 2014 general elections when Modi promised to work as a Chowkidar and by launching the campaign yet against the Rahul Gandhi comment is surely going to make some powerful connections with the people.